Incredible story about the purported author of the popular encryption software Truecrypt – made famous by Edward Snowden – and the back story behind its creation. Truly amazing.

Like the Silicon Valley entrepreneur who sells a company for $100 million, only to start another one in hopes that it will sell for a billion, Le Roux made the pursuit of more money, and more power, an end in and of itself. But the kid who had once locked himself in his bedroom, losing himself in code, had gone as far as his technical skills could take him. He wanted to be a different kind of businessman, a lord of the real underworld, not just the virtual one. “He made money on the pharmacies, and then he decided that he wanted to make more money, fast,” the Israeli associate told me. Le Roux wanted to diversify, to be bigger, he said. “The only way to do that was illegal. He was living inside a movie, you could almost say. He always had a dark side, it just developed more with money.”

Source: He Always Had a Dark Side

This is quite insane – yes even though we know Microsoft is changing and becoming more open under new leadership. From HN comments, it does seem to be a welcome move by developers. I may finally “upgrade” to Windows 10 just because of this. 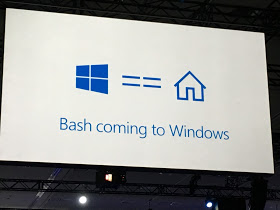 Source: From the Canyon Edge: Ubuntu on Windows — The Ubuntu Userspace for Windows Developers